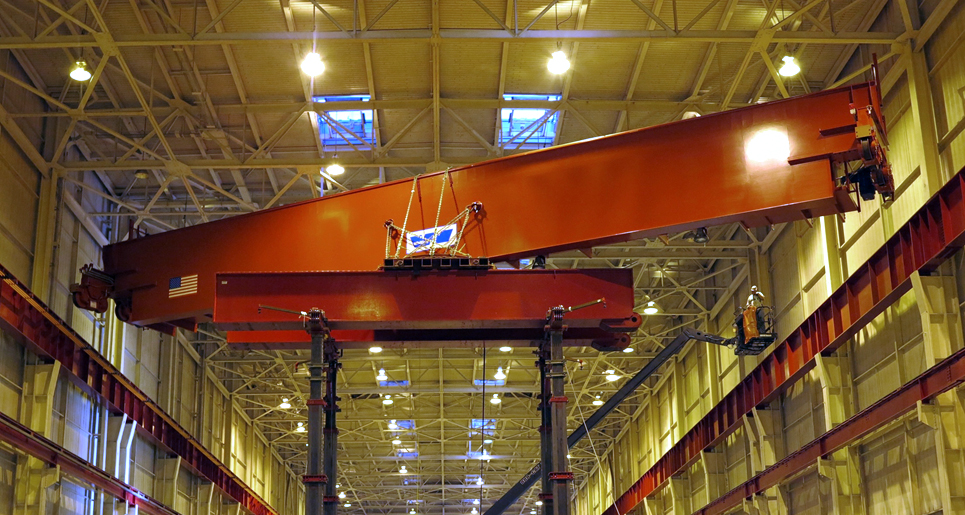 A 2.2 gigawatt nuclear generation plant in the U.S. is saving millions of dollars in maintenance outage costs as a result of the Whiting Corporation’s capability to install and commission a 250-ton turbine bridge crane while adjacent turbine generators ran at full power with no down time.

Safety was such a priority for the heavy lift at a nuclear generating station in Michigan, which produces enough power for a city of 1.25 million people, the Whiting Nuclear Group constructed an entire hydraulic heavy lifting and rotation test structure off-site in preparation for the actual installation.

Whiting Corporation says installing the bridge crane while the station was operating saved millions of dollars and a great deal of time prior to an upcoming refuelling outage. The innovative installation saved $18 million that would have been absorbed into the community rate base. The savings achieved in time and money are applicable to other turbine, generator and heavy lift applications across a wide range of industries seeking to enhance safety and avoid downtime.

It also cut the retrofit outage by a week, says Dave Weber, Director of Nuclear Services, Whiting Corporation. Whiting is a leading crane producer with overhead cranes in nearly all American nuclear and conventional power plants.

Applicable to diverse industries using turbines, the ultra-safe and time-saving safety lift and rotation project has won a global award for the operation to rig and lift more than five million pounds of components while adding a second Whiting crane to the plant’s generating room as part of an upgrade to enhance safety while curtailing downtime and potential accident hazards.

Workers configured the gantry system as an engineered temporary lift assembly that had never been used in such a manner during power operation. The design was less invasive to the plant structure. Thanks to the project, the industry now has a proven method for the practical application of a telescoping gantry system and a turntable for component rotation.

The second bridge crane will allow for a reduction in outage duration by as much as seven days in the upcoming turbine retrofit outage alone. All future outages will continue to realize additional costs savings, because a point of vulnerability has been eliminated through the addition of a second bridge crane.

Highlights of the lifting operation included: 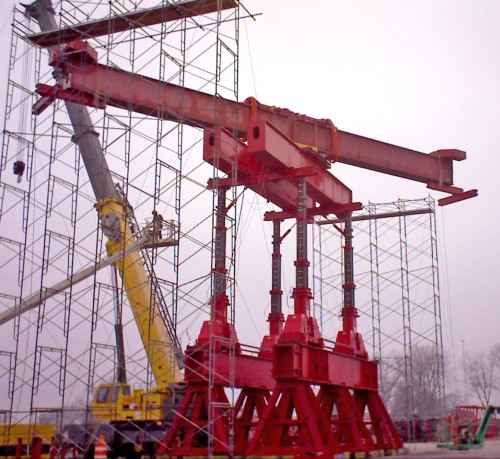 Such as the emphasis on safety that Whiting Corporation constructed an entire hydraulic heavy lifting and rotation structure off-site in preparation for the actual installation. This full-scale mock-up, which exactly replicated actual lifting conditions, was used to remotely load test the innovative telescoping gantry system and turntable technology to 125 percent of maximum load through the entire range of movements, while maintaining levelling tolerances to 0.5 percent.

The lifting team exceeded the provisions of Subpart 2.15 of ASME NQA 1-2008 quality assurance requirement, stipulating a dynamic load test equal to 110 percent of the rate load, instead choosing to proceed with a more conservative 125 percent rated load test. The trial also exceed the new ASME P30.1.2014 “Planning for Load Handling Activities” code issued during the project’s planning phase, which was exceeded despite not being part of the initial scope.

Test loads were intentionally taken beyond the operational limits to ensure there was sufficient margin to encompass any of several failure modes that could be encountered during installation. Controls were established to ensure the assembly of the gantry system was identical to that used during the demonstration, with redundant level control, LED levels and 3D Laser Scanning Total Station guidance, time lapse and live video of the entire sequence.

“We learned from the mock-up that the system was rock solid even in 15-20 mph winds (approximately 32 kph). Fine control of the power towers easily kept the lift level, while the rotation motion was exceptionally smooth,” said Weber.

An additional total station and operator was added to monitor the power towers in the reverse operating direction and a communication protocol was established. The system was reviewed for compliance with the new ASME P30.1 and found to be in alignment with this latest code.

“The installation method require collaborative efforts between ourselves as the crane vendor, the utility and the installation contractor to manage the risk by preforming a robust demonstration of lifting operations, in addition to independent review of analytical calculations for the temporary engineering lift system,” said Weber. “The results allowed the owner to avoid opening the turbine building envelope during installation and to complete the work without impacting outage duration.” 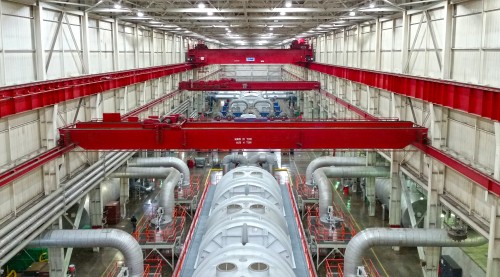 Whiting’s Nuclear group offer some of the country’s strongest engineering, analysis, monitoring and safety skill sets and capabilities operating 24/7, 365 days a year from seven service locations across the country.

As an industry leader for more than 30 years, Whiting’s Nuclear group serves both nuclear and conventional power generating operations like hydro and fossil fuel plants. Whiting specialists in each area complement and reinforce each other to ensure optimum service to all clients throughout each industry’s different seasonal business cycles with services extending to both Whiting and other-brand equipment.

Whiting can respond quickly to issues such as safety, downtime, outages, production, compliance and maintenance issues that demand immediate attention from diverse industry sectors. Whiting’s traditionally strong skills, engineering and standards base, includes membership of the American Society of Mechanical Engineers (ASME) and the Crane Manufacturers Association of America (CMAA), each promoting engineering excellence and standards. Whiting is also a founding member of the NOG-1 standard covering electric overhead and gantry multiple girder cranes with top running bridge and trolley used at nuclear facilities and components of cranes at nuclear facilities.