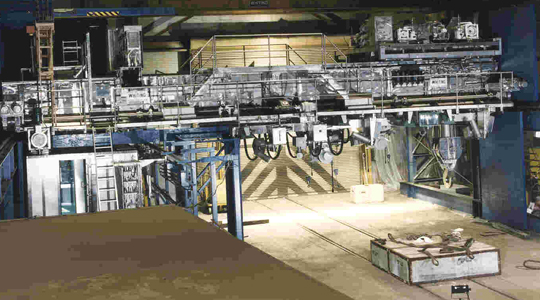 Where reactor servicing and spent fuel handling are in entirely separate areas or in separate buildings, a separate crane is used for spent fuel handling. The auxiliary hoist may be mounted on and travel with the main trolley, or the auxiliary may be a commercial overhead hoist unit as described in ANSI/ASME Standard B30.16 which is independently driven on a monorail track suspended under one (or both) of the crane girders.

For this service, the main hoist is commonly rated between 100 to 150 tons while the auxiliary hoist is generally between two (2) to seven (7) tons.

The spent fuel cask handling crane may also be a critical-load handling (Type 1) piece of equipment. This type of crane must meet NRC regulations.